The Holiday Season is upon us once more! As usual, we’re taking a little downtime this winter, but we’re changing up the dates a bit. Here are the details:

We will be closed from December 21st through 28th this year. If you need any ice cream cakes for a special occasion during that time, make sure to put in your order for a pickup on or before the 20th!

This closures are already added to our Yelp and Google Maps listings, so your phone’s Maps app should have the correct hours during that time.

Since we moved our closing week a bit early this year, we will be Open for both New Year’s Eve and New Year’s Day. NYE is on a Tuesday, so it’ll have normal weekday hours, noon–10:00 pm.

The Peppermint Stick limited-edition cake is only available through December 20th!

Don’t forget to place any special orders by the 17th if you need them before we close!

On December 18th–20th, you’ll get $5 off when you buy 3 pints. So come by to stock up on holiday flavors or your year-round favorite.

You can buy physical gift cards in store any time. Don’t forget to stock up by the 20th!

You can also purchase eGift cards online through our card processor, Square. Choose from two designs and have your gift delivered immediately or on a specified date.

Please note that because of Reasons, gift cards can only be used in our shop, not for online special orders

Thanks again to our customers, staff, and suppliers for a great 2019!

The fall/winter holiday times are approaching, and all your favorite local businesses are choosing different days to close/reopen/etc. We’ve already added our closing dates to Yelp and Google Maps, and we’ll be printing signs for the door. But in case you missed it there, here’s all the info in one place.

We’re having a staff appreciation party on November 12, so we’ll be be closed for that whole day.

Thanks again to everyone who’s enjoyed our ice cream (and coffee and cookies etc.) in 2018!

It’s that time of year again, and we have a few quick updates to share.

Like many businesses, we’re going to be closed for part of the holiday season to make sure all of our staff have the opportunity for some time off. We have two closures to announce.

Please plan your ice cream eating accordingly! If you need to stock up on ice cream, we’ll be having another pint sale before the holiday closure (if you really need a lot, you can pre-order gallons right on our site). 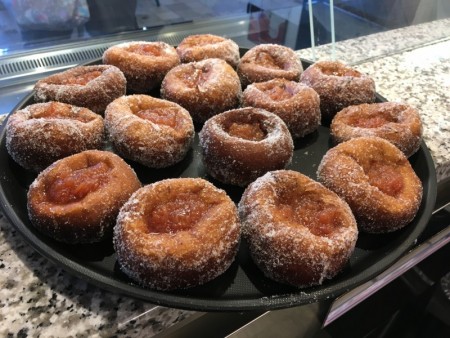 Hanukkah (we’re just going with Wikipedia’s spelling) will be here at sunset tonight, so once again we’re serving up Sufganiyot. No preorders this time; it’s first come, first served, while supplies last. We’ll have them today, Sunday, December 6th, and Tuesday, December 8th. The fillings are raspberry or quince jam. These are vegan!

Our friends from Runaway Clothes (the folks who brought you DURM apparel) are opening their own flagship retail shop right around the corner from us in early 2016. But if you want to browse their collection in person before the holidays, you can do it at The Parlour! They’ll be using part of our expanded dining room to set up a pop-up shop here December 10th–23rd! So you can stop by for ice cream and get some holiday gifts at the same time. Don’t forget to wash your hands before handling the merchandise!

Hello, friends! Thanks to all of you for making this a great summer. Now that the weather’s cooling down, we’re switching to our fall hours. As of October 15th, our hours will be:

Monday through Thursday 2pm to 10pm

Friday and Saturday 12pm to 11pm

Once we’ve switched to our fall hours, we’ll be bringing back Sunday brunch and ice cream flights. We’ll be making facebook event pages for both brunch and flights, so you’ll always know when they’re happening! And we’ll also be adding more baked goods and hot drink specials in the next week or two, so come in for ganache hot chocolate, coconut cake, and more!

This is kind of a strange week for us. We’ll be out with the bus a little less than usual, so in that respect it’ll be kind of slow. Besides our regular Rigsbee appearances Wednesday & Sunday, we’ll be at Oval Park on Thursday night and the Farmers Market Saturday morning. If you foresee intense ice cream cravings, please plan accordingly.

Aside from the light scooping schedule, there’s a lot going on this week. For one thing, the final results of this year’s Best of the Triangle survey are being published in the Indy. Notifications went out a few weeks ago, so know that we’re a finalist or winner in the Frozen Dessert category, but until we won’t know which until Wednesday. Either way, we’re thrilled to have made it into the listings, since we weren’t even in business for a year when voting ended! And we’re excited to see the rest of the results after seeing the occasional finalist announcement on the internet here and there.

“Okay,” you’re saying, “but that’s no excuse for the light scooping schedule, is it?” And you’re right, we could just read the results on our phones while selling ice cream, but there’s more. We’re putting the finishing touches on the text and video for that Kickstarter campaign we mentioned, and we’ll be launching it any day now. We’ve also got lots of meetings coming up to compare spaces and work on business planning.

We’re also taking a little time for friends and family this week! Mr. Parlour’s mom is coming to visit for a few days, and she’s bringing her mom, whom we haven’t seen in years! We obviously have to spend at least a little time with them. And some friends of ours are getting married on Saturday, so we’re taking that evening off to help celebrate. (Of course, that we’re not appearing at the Indy’s Best Of Party that night, but you should still go and check out lots of other Best Of winners and finalists!)

So we hope you’ll let us slide a little for this week’s relative lack of ice cream service. We assure you we’ll be picking up the slack for the rest of June. It’s almost summer, our employees need the hours, and you folks need delicious ice cream! See you out there soon!

Since we started scooping last May, we’ve been humbled and amazed at the great reception we’ve gotten from Durham and surrounding communities. As we fill in our schedule for another busy season, we’re excited to return some of that support by participating in several charity and community events!

The first event we’re participating in is one that we’re sure lots of folks are looking forward to. Empty Bowls is a benefit for Urban Ministries of Durham’s Community Cafe, which serves three meals a day, every day of the year, to shelter residents and anyone in need of a meal. The cafe relies on volunteers and donations to keep running, and this year’s Empty Bowls event hopes to raise $30,000 to fill more empty bowls. Mrs. Parlour’s previous employer is one of the many great local restaurants contributing this year by participating in a soup competition at The Armory on March 8th. You may be wondering how we fit in, since we serve ice cream, not soup! Well, this year, Empty Bowls is having an afterparty at Fullsteam with bands and a food truck mini-rodeo. Each truck will have a special that fits in a bowl. Ours will be a sundae, naturally, and we’ll be donating 10% of our sales for the evening to Urban Ministries.

The following week is the grand opening for Liberty Arts, a non-profit metalworking studio, in its new space at the Cordoba Art Center (right by the Scrap Exchange)! This one is March 16th, a 3rd Friday, so there’ll be lots going on in the neighborhood. We’re doing a super-secret promotion that night, so keep your ears to the ground for details.

The very next day (March 17th) we’ll be at the anniversary celebration for Marry Durham. Last year, lots of folks came out for a civil union, parade, and reception pledging a commitment to keeping the Bull City great. The organizers raised $25,00 for five local charities in 2011. Vendors at this year’s event are also donating 10% for local charities (we don’t have the full list yet, but it will include at least some of last year’s recipients).

On April 21st, we head to neighboring towns for two community events in one day. First, we’ll be at the K9-3k dog walk through downtown Raleigh. This event raises money for the SPCA of Wake County. Since the Parlour family includes 3 rescued dogs and 3 rescued cats, we’re hoping lots of people register for the walk! And we’ll have free treats for your 4-legged companions. After the dog walk, we’re heading over to Briar Chapel for their Earth Day celebration, where we’ll be contributing a percentage of proceeds to the Abundance Foundation.

We’re also thrilled to be participating in this year’s Beaver Queen Pageant on June 2nd. The Pageant is a family-friendly outdoor event with music and food. It’s also a fundraiser for the Ellerbe Creek Watershed Association, which is dedicated to restoring and preserving Ellerbe Creek, which runs right through Durham (including the park where we walk our dogs). Keep an eye on the Beaver Lodge website to find out about donating or participating in the pageant!

There are still more events we’re confirmed for and probably others to come, but this post is fairly long already. And we wanted to get to this last bit:

On a personal note…

Even before all these events, we’re participating in one more thing related to our little corner of the community. Our fellow food trucker Kenny Pettis, the Pop in Will and Pop’s was badly injured in a motorcycle accident earlier in February. During the week of the February 26th, we’re joining several other food trucks to collect donations to help out with Pop’s mounting medical expenses. If you’re a fan of Will & Pop’s locally-sourced street eats, or just want to show your support for the Triangle’s food trucks, please consider making a donation. Each truck will be pitching in with a contribution of our own, too, picking one day that week to donate a percentage of sales. We’ll post a list of participating trucks in the next few days.

Thanks for reading, and we’ll see y’all out and around soon!